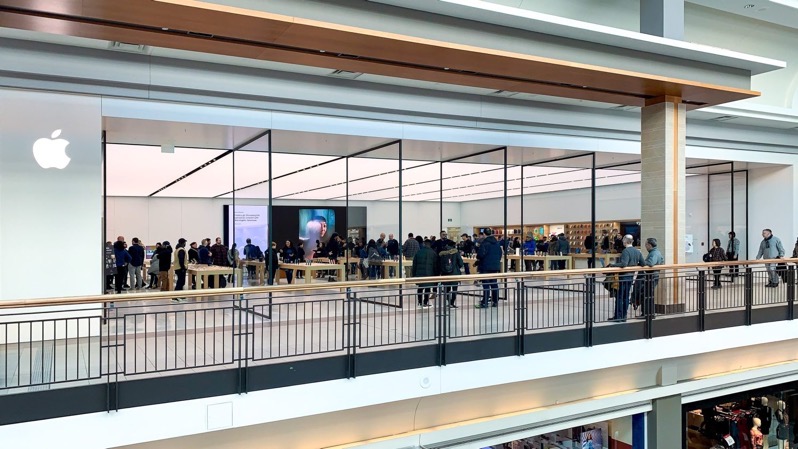 The new Apple Fairview Store celebrated its grand opening today at Cadillac Fairview Mall in Toronto. The new location is an expansion of the previous location, as Apple acquired the retail space next to it, nearly doubling its size to 10,287 square feet.

The grand opening took place today at 9:30am local time, a rare Leap Day opening for an Apple Store. According to Apple’s website earlier this week, it called the new location “an inspired move”, telling customers to “Visit Apple Fairview at our new location on February 29 at 9:30 a.m.”

Toronto resident Ronald shared some photos of the grand opening on 9to5Mac, and had the chance to attend the store’s first Today at Apple sessions, which also had one of his #ShotoniPhone pictures featured in the store.

The first thing you’ll notice about Apple Fairview are the massive pivoting front doors, offering a clear view of the store’s expanded table layout (6 tables wide by 3 tables deep; versus the previous 6 by 4 layout).

New store features include the modern Forum and video wall, only the second store in Canada to gain this feature (Apple Sherway Gardens was the first).

Did you get a chance to visit the Apple Fairview store? It looks pretty nice and much larger than before.

Update: An earlier version of this article incorrectly mentioned the store was at Eaton Centre, instead of Fairview Mall. We regret the error (on lack of caffeine).