A fake advertisement titled “Update to iOS 7 and become waterproof” circulating on social networks is claiming that users can make their iPhones waterproof by upgrading their device’s software, tricking users into destroying their phones, The Independent reports. The misleading ad is also accompanied by a mocked-up advert that closely resembles Apple’s official marketing (see below). 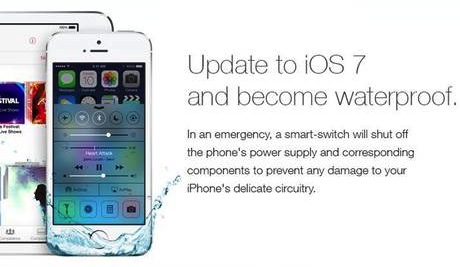 The fake ad states that in an emergency, a smart-switch will shut off the phone’s power supply and corresponding components to prevent any damage to your iPhone’s delicate circuitry. The spoof advert reportedly originated on the notorious online forum 4chan, which regularly undertakes campaigns that hijack social media in order to trick the public.

Users who believed the advert reportedly upgraded their iPhones and dunked the devices to test the feature, only to find that they had broken the expensive gadgets.

Some have taken to Twitter to vent their displeasure at being tricked. One user wrote “Ok whoever said IOS7 is waterproof GO F*** YOURSELF”.

The iOS 7 update was released by Apple last week and introduces many new features and a visual overhaul, but surely does not make the iPhones waterproof.

Update: This was a joke created by 4chan. They created the fake ad and also created fake accounts to send out tweets saying they had fallen for the ad.