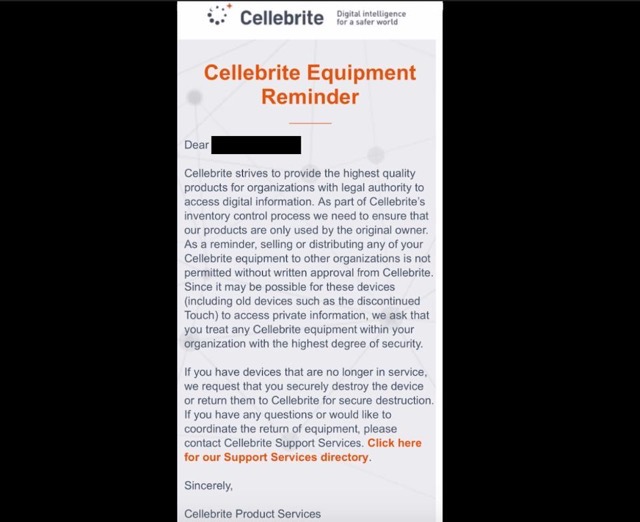 Israeli-made iPhone hacking tool called ‘Cellebrite UFED’, which is commonly used by the FBI and other law enforcement agencies around the globe to break open iPhones and Androids and extract data, is being sold on eBay as low as $100 per unit. According to Forbes, comparable, brand-new Cellebrite tools start at $6,000.

Cellebrite UFED classic exploits & functions – I got this gem at an auction – has SIM card cloning features (elite) pic.twitter.com/xmLCgVO7iG

Cellebrite, which isn’t happy about the secondhand sales of its hacking systems for between $100 and $1,000 a unit on eBay, has now issued a warning to customers about reselling its hugely popular hacking devices because they could be used to access individuals’ private data.

“When eBay merchant Mr. Balaj was looking through a pile of hi-fi junk at an auction in the U.K., he came across an odd-looking device. Easily mistaken for a child’s tablet, it had the word “Cellebrite” written on it. To Mr. Balaj, it appeared to be a worthless piece of electronic flotsam, so he left it in his garage to gather dust for eight months.

But recently he’s learned just what he had his hands on: a valuable, Israeli-made piece of technology called the Cellebrite UFED.”

The report notes that rather than return the UFED units to Cellebrite so they can be properly decommissioned, it appears that police or other individuals who’ve acquired the machines are flogging them and failing to properly wipe them.

Cybersecurity researcher Matthew Hickey, who has bought a handful of UFED units, has discovered that the secondhand kit contained information on what devices were searched.

“In one screenshot provided by Hickey to Forbes, the previous UFED user had raided phones from Samsung, LG, ZTE, and Motorola. Hickey had tested it on old iPhone and iPod models with success.”

Cellebrite has not yet issued any official comment on the matter.