With iOS 4.2 Beta 1 released to developers, there has been a lot of new feature discoveries for the iPad–but what about the iPhone? Well, look no further because some new features are coming your way, as discovered by Mark Gurman from 9to5Mac.

Here is a list of what’s upcoming in iOS 4.2 for iPhone: 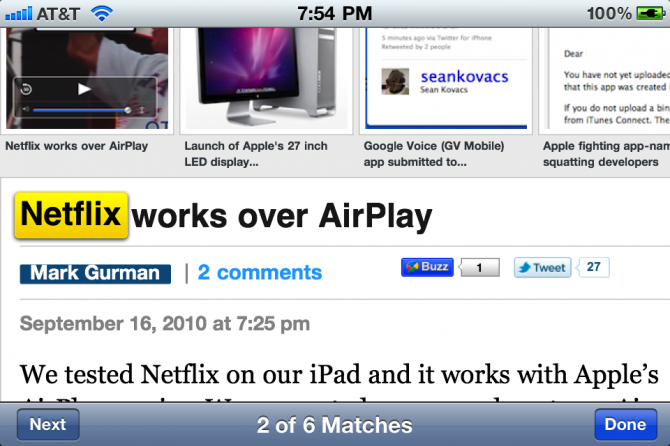 The features that matter to me out of that list are the individual SMS tones for contacts, FaceTime shortcut button (I can’t remember the last time I’ve had a FaceTime chat), and the Find Text within Safari capability.

It’s been three years since the iPhone first debuted and I’m still wondering when Apple will introduce some new SMS tones already. Yes, I know I can jailbreak and change them up, but for the average person, how many times have you subconsciously checked your iPhone after hearing your “tone” go off nearby? I’ve done it many times.

The find on page is an awesome feature, that will surely make browsing web pages on the iPhone even easier. Searching for that keyword will now be instant, whereas it was quite the chore. I’m looking forward to even more features being discovered in iOS 4.2–maybe the black keyboard like on the iPad?

What do you think is the most important feature in iOS 4.2?