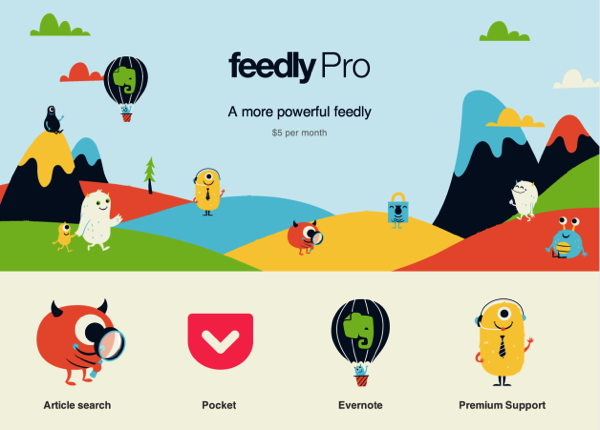 Earlier this month Feedly sold out of their limited edition $5 per month Pro version, but the company has announced today Feedly Pro is now available for the general public at a cost of $5 per month or $45 per year:

We are excited to announce that feedly pro is now generally available. For $5 per month or $45 per year, you can get access to the first batch of pro features: search, one-click Evernote integration, one-click Pocket integration, and premium customer support.

Feedly says the capital raised by Pro users will allow them to become more innovative with both standard and Pro versions of the service, plus help invest in infrastructure and customer support.

Back in June, Feedly launched its cloud solution to replace Google Reader and said their new infrastructure could handle processing up to 100 million feeds and billions of articles published daily.

Apple's VP of Platform Architecture and Hardware Technologies Tim Millet and VP of Worldwide Product Marketing Bob Borchers recently sat down for an interview with TechCrunch where the pair talked about the tech giant's homemade M-series chips, gaming on Macs with Apple silicon, and more. Millet, who has been at Apple for almost 17 years and...
Nehal Malik
5 mins ago

The National Football League (NFL) and DAZN Group announced on Tuesday to extend their partnership in Canada and globally, with a new 10-year deal that begins with the 2023 season. With NFL Game Pass International, football fans outside the USA will be able to watch every NFL game through the regular season, postseason and the final […]
Gary Ng
15 mins ago