A new Apple Watch app released by mobile security firm Lookout can help you locate a lost or stolen iPhone by pointing you to its last known location, TechCrunch reports. The app also alerts you if you’re about to leave your iPhone behind, helping you in not losing your handset in the first place. The source notes that the app can trigger a loud alert on your iPhone to help you locate it, something that can come in handy in cases where you suspect your iPhone has just been lifted by a pickpocket. 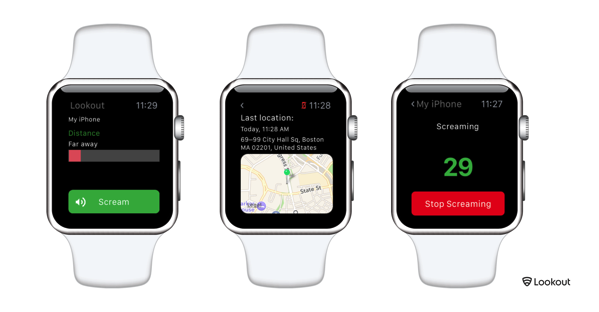 The Lookout Apple Watch app displays a “distance visualization bar” to show you how far away you are from your iPhone. The bar adjusts as you walk around so you know if you’re getting “warmer” or “colder”, notes the official blog post. The feature requires a Bluetooth connection to work which makes it ideal for finding the iPhone around the house or other smaller areas, though you can always make your iPhone “scream” over Wi-Fi, in case you’re out of Bluetooth range.

“If you’ve left your phone somewhere much further away, the app displays a map showing the phone’s last known location. This location is nearly real-time, as the backend is constantly tracking the iPhone’s GPS. One caveat here: apps that utilize the GPS can have an effect on your iPhone’s battery. However, as the app has only just launched, it’s unclear at this time how pronounced that effect will be for Lookout’s app.”

Simply download or update to the latest version of the Lookout app for iPhone and sync your Apple Watch to try out the new app.