You Can Now Find Mentors and Mentees in Facebook Groups

Aimed at making it simpler for people to get help in achieving their goals by connecting with others in their community who have the experience or expertise to help, Facebook has today announced Mentorship for Facebook Groups that makes it easy to find mentors and mentees in groups. 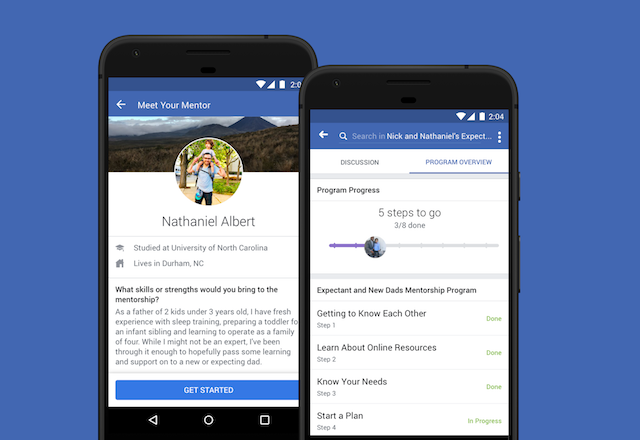 “By bringing Mentorship to groups, people in existing communities can now connect and get one-on-one support through a guided program”, says Gabriel Cohen, Facebook’s Product Manager for Mentorship. The feature is available to people within select groups focused on parenting, professional and personal development.

Facebook notes that Mentorship is built with privacy and safety in mind. All communications between a mentor and mentee are visible only to the pair. People can report issues to Facebook, and they have access to the same reporting and blocking features available elsewhere on Facebook.

Group admins create a mentorship program. Admins can choose from a variety of template programs, such as career advancement, skill development, or encouragement and support, and select the one that best fits their community’s needs.

People sign up and are matched with their mentor/ mentee: Group members can sign up to be a mentor or a mentee, then the group admin will pair people together.

Pairs are introduced. Pairs can get to know each other and work through program steps in their one-on-one mentorship program on Facebook. They can share and comment on posts there or communicate through Messenger.

Mentors and mentees get step-by-step guidance. The pairs progress through a guided program that encourages them to check in with each other weekly.

Mentorship is only available to people 18 years and older.

Netflix has announced it will be making its own ‘world class’ games studio, to be established in Helsinki, Finland, led by Marko Lastikka as the studio director. Amir Rahimi, VP of Game Studios, Netflix, said on Monday this move “is another step in our vision to build a world-class games studio that will bring a variety […]
Gary Ng
8 mins ago