Apple has just introduced a new AirPods tracking feature in the updated Find My iPhone app in iOS 10.3, that uses the AirPods’ wireless technology to track their whereabouts, since they do not have a built-in GPS. According to The Wall Street Journal, the new feature is available to developers starting today, and will be made available to the public soon as well. 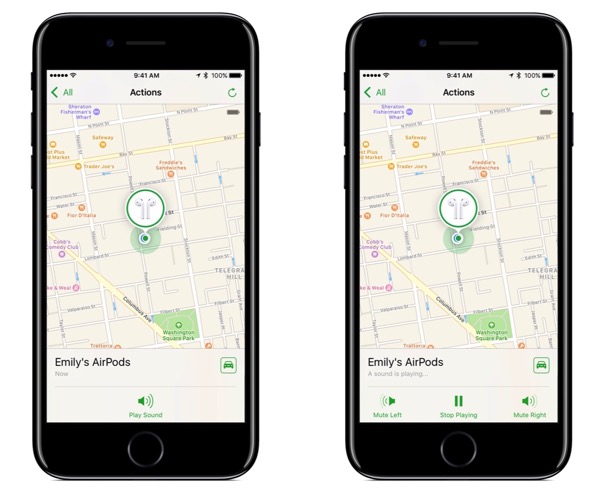 The new “Find My AirPods” feature relies on the GPS in your iPhone, similar to most dedicated lost-item Bluetooth trackers (via CNET). The feature could come in handy in a number of common scenarios. For instance, if you forgot your AirPods at home, the new feature would let you confirm they were safe at home. The app plots on a map the last place the AirPods were in Bluetooth range of any iOS device that’s signed into your iCloud account.

The most likely situation requires just the human ear—take it from someone who has repeatedly discovered an AirPod at the bottom of a purse pocket. Apple has added an alarm to help find earbuds in proximity. Tap “Play Sound” in the iOS app and the AirPod will start chirping. In the app, you can specify which AirPod you’d like to sound. Only problem? If the AirPod’s battery runs out, it’ll remain silent.

Similarly, if you lose your AirPods while you’re out for a run, the updated Find My iPhone app’s map may show the location where the AirPods were last connected. You’ll of course need your phone with you for this to work, as the Apple Watch’s GPS won’t help.

According to a report by MacRumors, Apple has updated its battery replacement policy for the sixth-generation ‌iPad mini‌, allowing customers to get their batteries replaced without requiring a device replacement. Prior to the announcement, if a customer wanted to get their iPad mini 6 battery replaced, Apple Stores, authorized service providers, and repair centers will give those...
Usman Qureshi
50 mins ago