MobileMe subscribers will be happy to know that the Find My iPhone now works on Mobile Safari. Apple’s MobileMe support page now has the following info:

Accessing me.com with your iPhone/iPod touch allows you access to the following items:

* A link to setup instructions for setting up Mail, Contacts, Calendars, and Find my iPhone on your iPhone/iPod touch.
* A link to use Find My iPhone from a friend’s iPhone/iPod touch if you need to locate your lost iPhone/iPod on a map, display a message, play a sound, or remotely lock or wipe it.

That’s right folks. You can now access Find My iPhone on within Mobile Safari to locate your lost phone, send a message, play a sound, or do a remote lock/wipe. We’ve been waiting for this for a long time! You will no longer need to hunt down a laptop to track a lost or stolen iPhone! 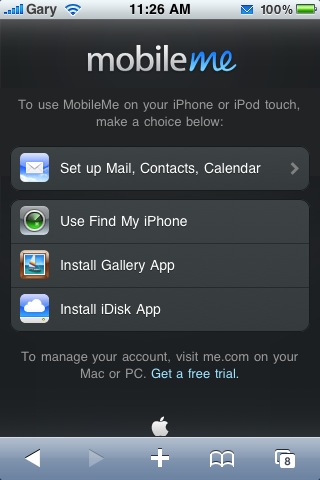