While millions of consumers around the world (including us) are still waiting for the privilege to pre-order an Apple Watch, let alone actually receive one, the fine folks over at iFixit have already torn an original model into dozens of tiny, beautiful, revolutionary pieces.

If you thought that the Apple Watch was a good looking piece of tech (or fashion) on the outside, just wait until you see the components on the inside. Since the Apple I days, Apple has always been a proponent of the belief that the way the inside of a product looks is just as important as the outside, and that’s clearly a philosophy carried into Apple’s first post-Jobs product category. Seriously, this thing is incredible.

Before digging into the device, iFixit’s Julia Bluff notes that “The hype does not disappoint. The watch is a masterwork of utilitarianism and high fashion, keeping with Marc Newson’s legacy of timepiece craftsmanship. Truly, Apple’s crowning achievement. We were concerned with repairability and device longevity, but our fears were quickly relieved. The device is easily repaired by a trained technician—and we expect the battery life to exceed expectations.”

Easily repaired, huh? That’s a term we don’t hear in connotation with most recent Apple offerings. Hopefully, this is the start of a new trend! 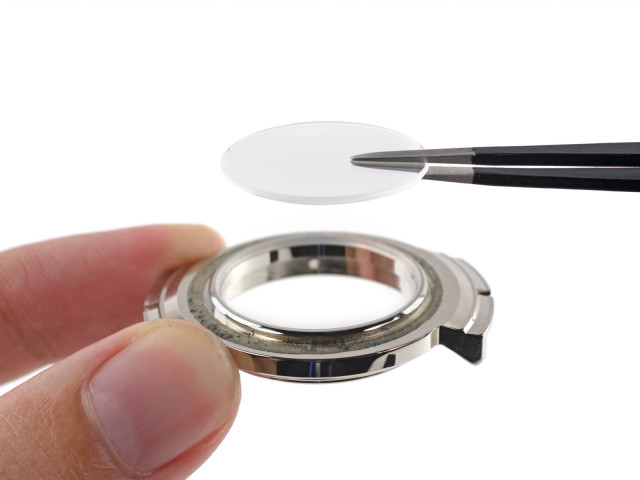 Those worried about replacing broken glass (especially in the extremely scratch-resistant, but more shatter-prone sapphire option) should note that the glass covering is easily removed and replaced, even from the laminated display. This marks a true evolution in Apple’s display engineering, as cracking the glass of any laminated iPhone or iPad Air 2 display will force you to replace the entire front panel.

I was already planning to pick up the Apple Watch, but as someone who doesn’t often wear a wristwatch, I’ve always felt wary of the durability of such a device. After poring over iFixit’s highly detailed teardown, however, I can sleep easy knowing that if the unthinkable does happen, an easy repair is just a Genius Bar visit away.

Again, you can check out iFixit’s full teardown here, or watch their video version below!

Be sure to let us know which version of the Apple Watch you plan to pick up, and if you were fooled by iFixit’s clever April Fool’s day prank. The watch torn apart was actually a real Apple timepiece, made available to customers back in 1995.