AnandTech has published the first iPhone 5 SunSpider javascript benchmarks, and the latest iPhone tops tops the charts at 914.7 (lower is better):

As we surmised in our A6 Geekbench post, it looks like Apple specifically targeted improvements in the memory subsystem when designing the A6’s CPU cores. The result is the fastest SunSpider test we’ve ever recorded on a smartphone – faster even than Intel’s Atom Z2460.

Taking a look at the chart below, you’ll note the iPhone 5 is at the top of the list (lower is better), beating top Android models such as the Galaxy S III. For comparison, the iPhone 4S scored 2250, and the iPhone 4 at 3545: 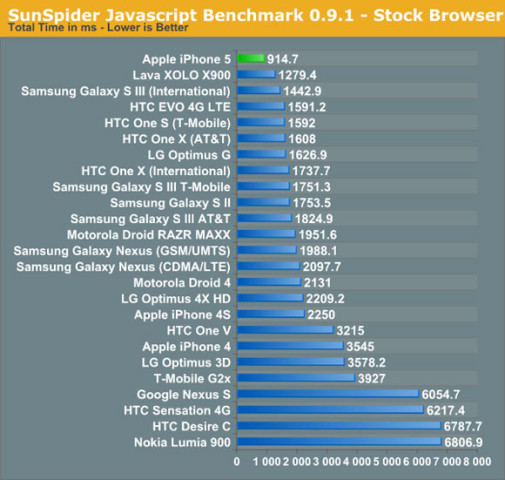 For comparisons to this test, Endgadget also noted a similar SunSpider score in their iPhone 5 review, at 924–it appears javascript performance is blazing on the new iPhone:

SunSpider scores average at 924ms, which is more than twice as fast as the 2,200ms the iPhone 4S manages and still quite a bit quicker than the 1,400ms scored by the Galaxy S III and the 1,700ms managed by the HTC One X. More important than numbers, web pages load very quickly, snapping into view as fast as your data plan can shovel the bits into Safari and, once there, smoothly reacting to your gestures.

With iPhone 5 units set to arrive this Friday, alongside the launch, you can expect a tonne more benchmarks to hit the inter webs.