Fitbit has today announced the launch of a brand new feature called ‘Sleep Schedule’, which is integrated in every Fitbit band with automatic sleep-tracking abilities, and gives you customized sleep goals based on all the data your Fitbit has collected around your sleep habits. The feature, which has been introduced as an update to Fitbits existing iOS and Android apps, interestingly seems quite similar to the new “Bedtime” feature Apple recently previewed in iOS 10. 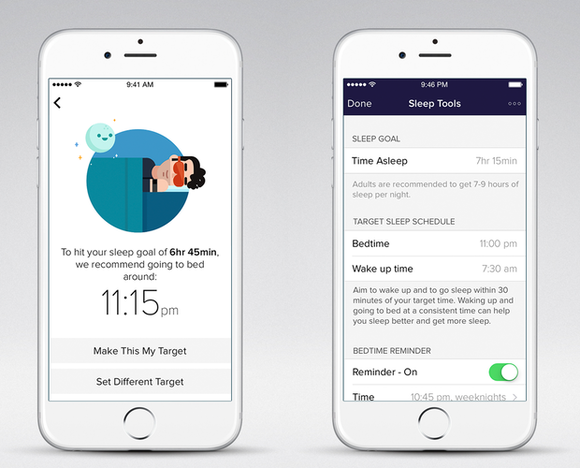 Fitbit says its new Sleep Schedule feature helps users get a more consistent pattern of sleep, by personalizing sleep goals, bedtime and wakeup targets, and by reminding users to stay on schedule. According to Fitbit’s sleep experts, adhering to a consistent sleep routine is one of the most important things people can do to improve their sleep. “If you’re constantly changing your sleep routine, it can have the same effect as giving yourself jetlag because you are continually changing your circadian rhythm, also known as your internal clock, which can negatively impact your health and wellness,” said Michael Grandner, PhD.

“To improve your physical performance, mental health and cognitive functions, you should aim to get a sufficient amount of sleep each night and be consistent with the times you go to sleep and wake up each day. Fitbit’s new Sleep Schedule tool makes it easier for people to see how much sleep they’re actually getting in order to establish a healthy routine – this has the potential to help millions of people around the world improve their sleep and overall wellbeing, which is really exciting.”

“What’s great about the new Fitbit Sleep Schedule feature is that it looks at your sleep data from your Fitbit device you’re wearing day and night, analyzes it for patterns and creates a personalized schedule just for you,” said Tim Roberts, Executive Vice President, Interactive at Fitbit.

You can try out the new feature on your Fitbit device capable of tracking sleep by updating your iOS app.

Apple earlier this month unveiled Apple Watch Ultra, the tech giant's highest-end smartwatch to date. The premium smartwatch carries a starting price of $1,099 and is geared towards extreme athletes and adventurers. Apple Watch Ultra is designed to be the perfect companion for when you're far away from civilization, whether you're below sea level or...
Nehal Malik
48 mins ago