One of the biggest stories on the weekend was the confirmation of Adobe’s Flash for the iPhone, leaked by Adobe CEO, Shantanu Narayen. Adobe’s Flash software is what powers many video sites have use the technology to display videos, animated games, etc.

Adobe’s Flash is a the missing piece that would improve on mobile Safari’s already existing dominance. Just imagine the plethora of other websites you could visit and have them display properly on your iPhone!

The following quote was spoken during a Bloomberg Television interview from the World Economic Forum in Davos, Switzerland:

“It’s a hard technical challenge, and that’s part of the reason Apple and Adobe are collaborating,” Narayen told Bloomberg Television. “The ball is in our court. The onus is on us to deliver.”

So, there you have it. Cold, hard evidence spoken right from the source that Adobe is working on a Flash solution for the iPhone. Previously, Steve Jobs mentioned how Flash was too slow for the iPhone and the “Flash Lite” version couldn’t be used properly for the web.

The question remains though, will Flash work on current iPhones through a firmware update, or do you think it will arrive on the next generation iPhone with upgraded hardware specs? 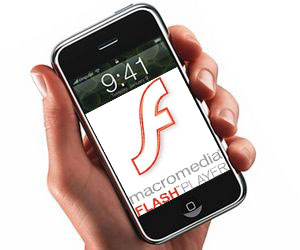