According to Flurry Analytics, the leading mobile measurement and advertising platform, overall mobile apps usage has grown 115% in 2013, led by messaging and social apps which showed 203% growth during the year. All the other app categories also showed significant growth over the last twelve months, with Utilities and Productivity apps posting 150% increase in use year-over year. 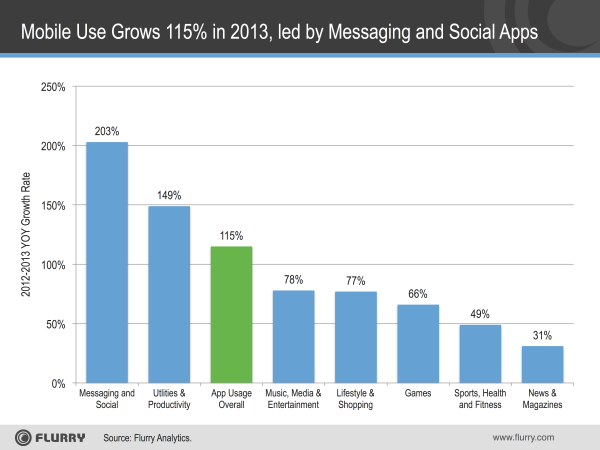 As seen in the chart above, the segment that showed the most dramatic growth in 2013 was Messaging, including Social and Photo sharing apps. The growth in that segment is primarily believed to be due to the attention that messaging apps such as WhatsApp, WeChat, KakaoTalk, LINE, Facebook Messenger and SnapChat receive in the press. What is surprising however, is that the rate of growth dramatically outpaced other popular categories, almost tripling usage year-over-year.

This type of growth could explain the high valuation Facebook has allegedly put on SnapChat, or Facebook’s rush to add direct messaging in Instagram, an app frequented by teens. 2014 will be a crucial year for these applications and will determine whether they will remain independent, but highly frequented applications, or become killer mobile platforms and distribution channels.

At Flurry, we are fascinated by the growth, the retention rate, the reach and the frequency for this category. We see the potential for what it might become, but before declaring that mobile is all about messaging apps, we would like to see more of these marketing/commerce experiments a la Xiaomi/WeChat happen at scale and in many countries.