Flurry, a mobile application analytics company, decided to study just how fast iOS and Android devices were growing these days. So they compiled data and provided us with some interesting facts and charts.

In effort to prove their point, read the following facts:

Compared to recent technologies, smart device adoption is being adopted 10X faster than that of the 80s PC revolution, 2X faster than that of 90s Internet Boom and 3X faster than that of recent social network adoption.  Five years into the smart device growth curve, expansion of this new technology is rapidly expanding beyond early adopter markets such as such as North America and Western Europe, creating a true worldwide addressable market.  Overall, Flurry estimates that there were over 640 million iOS and Android devices in use during the month of July 2012.

Between all those facts, I perceived the social networking adoption fact as the most fascinating. I’m aware the Twitter and Facebook have a large crowd, however I find it hard to conceive that more people are buying iOS and Android devices daily than joining a free social network. I guess that just affirms just how popular these two mobile operating-system companies are.

With data from over 200,000 applications, Flurry supposedly can detect an estimated 90 percent of all devices in any given month. With that established, they are able to provide analytics on the fastest growing smartphone countries, which countries use applications most frequently, and more. 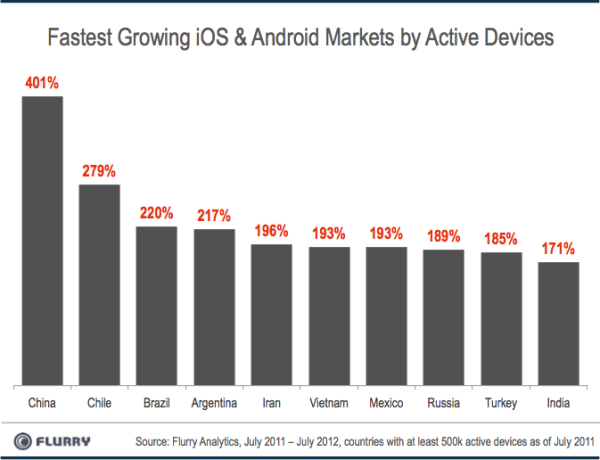 While the United States may have the lead on China, owning 165 million of the worlds devices compared to 128 million, China is working on a comeback in recent times. In the past year, China’s iOS and Android market has grown 401 percent from years prior. Trailing behind is Chile, Brazil, and Argentina.

Next we are going to compare application usage among the globe. According to the chart, the United States dropped their average app session time considerably in July 2012, in comparison to July 2011. Countries ranked two-thru-nine have begun to spend more time on applications since last year. 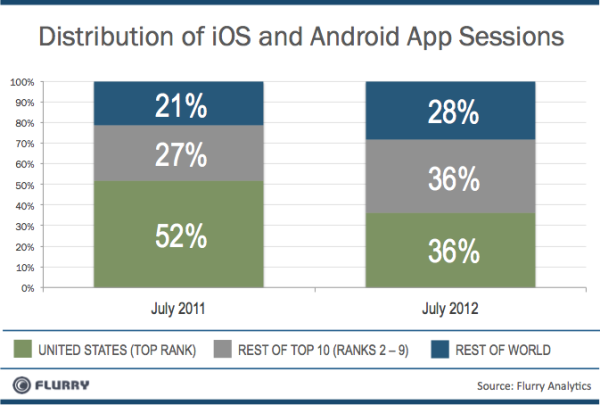 With such an adoption rate, I sure do have too many friends around me without iOS or Android smartphones. It shouldn’t be very long until smartphones completely overtake regular old cellphones.

When did you buy your first smartphone? If you don’t own one, then do you have plans to buy one?