A new Apple patent titled “folded telephoto camera lens system” reveals the company has invented a new variety of ultra-compact, foldable telephoto lens system for future iOS devices. According to AppleInsider, the patent details a method of forming a telephoto or zoom lens into a sort of lowercase “r” shape, much like an old-fashioned periscope. 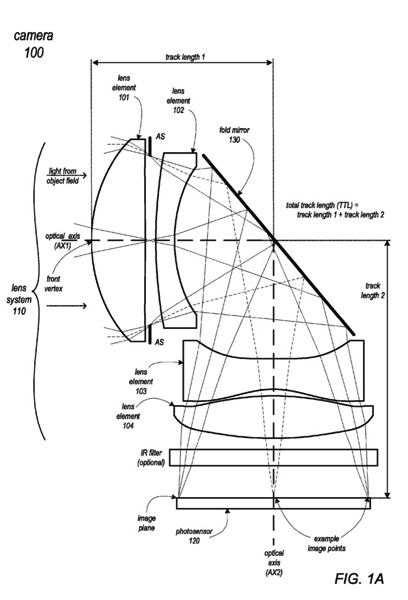 Apple explains that light is channeled in through the primary lens, bounced off of a mirror and redirected to the secondary lens which focuses it on the image sensor. Furthermore, moving the secondary lens up and down even by tiny increments that may amount to fractions of a millimeter, would achieve the telephoto results.

“The days of being forced to deal with a bulbous camera bump to enjoy optical zoom in a smartphone may soon be over, as Apple has invented a new variety of compact telephoto lens system.

Interestingly, Apple discusses one scenario in which the folding telephoto lens would be included as a secondary option. Users would be free to choose between it and a more standard wider-field lens when taking photos”.

Apple is widely rumoured to move future iPhones to a dual-camera setup, something we might see happen as early as this year with the “iPhone 7”.