Fortnite-Preinstalled iPhones Listed on eBay for as Much as $10,000 [u]

Last week, Apple removed Epic Games’ battle royale Fortnite from the App Store following the developer’s implementation of its own payment system that bypasses the iPhone maker’s 30% fee. Soon after, Google also pulled the game from Google Play citing the update as a terms-of-service violation. 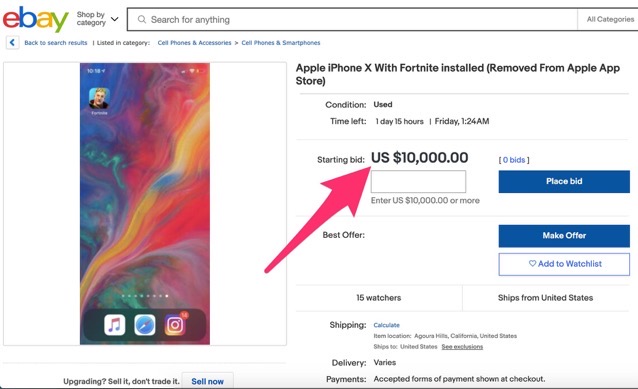 However, Apple has no way to take Fortnite away from iPhone owners who’ve had the game installed on their devices before it was kicked off from the App Store. As a result, some resellers have listed their iPhones with Fortnite preinstalled on eBay’s US store for as much as $10,000.

As noted by Business Insider, searching the term “fortnite iPhone” on eBay yields more than 100 listings of resellers with various iPhone models, with the $10,000 option coming with the game preinstalled on 2017’s iPhone X.

And even though Fortnite is currently not available to download from the App Store, it’s unlikely to stay pulled forever as it’s one of the most popular games, and Apple has repeatedly said it wants to put the game back.

Well, how much are you willing to pay for a Fortnite-preinstalled iPhone 11 Pro Max?