In a recent article published in Fortune, Steve Jobs’ chronicler Brent Schlender has published several personal stories from 25 years of covering Apple and its late co-founder, offering a unique look at how Steve Jobs interacted with the media. The article tells stories Schlender says he “was never able to tell, either because they would violate a personal confidence.” 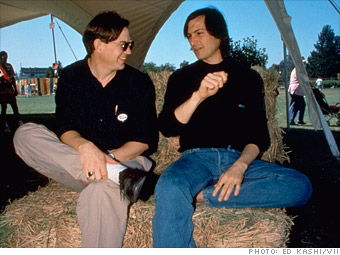 Schlender first met Jobs in 1987 during his “wilderness period”, two years after Jobs had been ousted from Apple. “Jobs cultivated our relationship because he wanted to stay in the public eye in order to promote Next and Pixar and to rebuild his credibility as a business and technology savant”.

Amongst the antidotes shared is when Schlender and John Hurey, Time Inc’s editor-in-chief, met Jobs to get advice on how to save AOL Time Warner. Jobs reportedly looked at them “incredulously” saying it was a waste of time “to look in the rearview mirror.” He then launched into a disparaging rant before spontaneously sketching out a strategy for turning AOL into a media company. A stategy that Schlender noted is “more or less the course AOL eventually followed.”

From Schlenders personal photo collection: Jobs scrutinizes the dock of icons that appears on the bottom of the screen of Apple's OS X (1999)

Schlender also recounts a personal story where Jobs invited him to bring his two daughters over to his house to screen a rough cut of “Toy Story,” Pixar’s first feature film.

“Steve Jobs certainly was a living legend and a prima donna, as well as a journalist’s dream interview,” he concluded. “He could be a beguiling charmer when he wanted to be and a petulant whiner when things didn’t go his way. He loved his family. Yes, he was larger than life, but life deserted him. In other words, he was as human as they come.”