Fortune: Steve Jobs is the Greatest Entrepreneur of Our Time 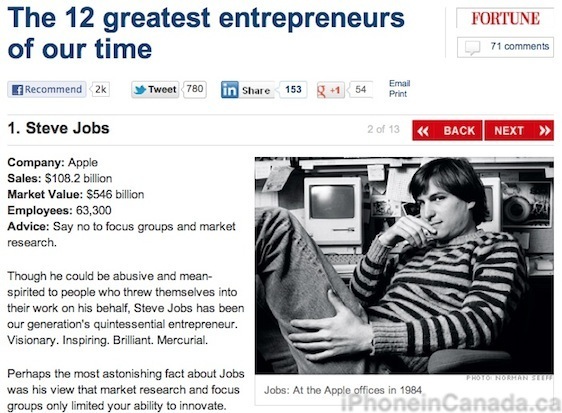 Steve Jobs has been named the ‘Greatest Entrepreneur of our Time,‘ beating out others such as the co-founder of Microsoft, Bill Gates. Here’s how Fortune describes Jobs:

Though he could be abusive and mean-spirited to people who threw themselves into their work on his behalf, Steve Jobs has been our generation’s quintessential entrepreneur. Visionary. Inspiring. Brilliant. Mercurial.

Perhaps the most astonishing fact about Jobs was his view that market research and focus groups only limited your ability to innovate. Asked how much research was done to guide Apple when he introduced the iPad, Jobs famously quipped, “None. It isn’t the consumers’ job to know what they want. It’s hard for [consumers] to tell you what they want when they’ve never seen anything remotely like it.”

Is Jobs deserving of being number one on Fortune’s list? Absolutely. Apple was on the brink of bankruptcy before Jobs was able to turn things around, all the way until his death at age 56. Apple now stands as the world’s largest company in terms of stock valuation; the stock has exceeded a half trillion dollar valuation. Look around you and count the number of iOS devices you see–they’re everywhere and continue to sell like hotcakes.

Below are some honourable mentions that did not make the top 12 list from above.

What do you think? Is Jobs the greatest entrepreneur of our time?