Apple’s leading iPhone assembler Hon Hai Precision Industry, commonly referred to as Foxconn Technology Group, has posted revenues of $136.38 billion, which is down 2.81% from a year ago and marks the company’s first-ever annual sales decline since the company went public in 1991. According to Nikkei Asian Review, the Taiwanese manufacture has blamed low demand from its biggest client Apple and the saturated smartphone market for the decline. 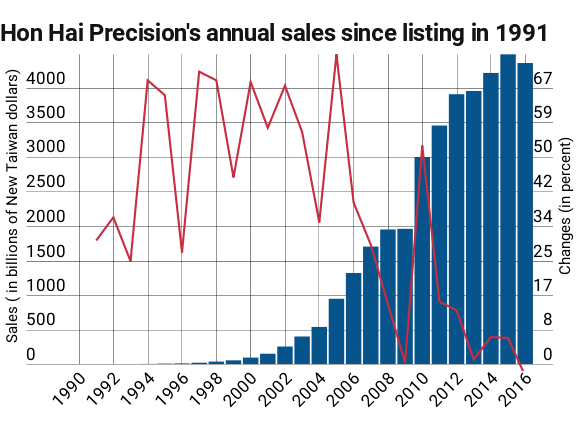 Foxconn’s December revenue did however grow 9.76% year-on-year, thanks to orders for the approaching Chinese New Year holidays and the relatively robust demand for the iPhone 7 Plus. Meanwhile, the company’s smaller rival Pegatron, which mainly assembles the iPhone 7 model,  posted a 27.43% decline in revenues for December as compared to last year.

According to Vincent Chen, head of regional research at Yuanta Investment Consulting, iPhone shipments in 2016 declined to 207 million, from 236 million in 2015.

“Look forward to 2017, we think Foxconn’s revenue could grow by 5% to 10%,” said Chen. The growth drivers for the current year will come from healthier demand for the next iPhone 8 and a mild rebound in the PC market, according to Chen. Foxconn is also the world’s biggest desktop assembler.

Foxconn’s unprecedented sales drop was in large part caused by Apple’s first revenue fall since 2001. Apple is Foxconn’s no.1 client and accounts for more than 50% of its revenue.

Analysts believes that for 2017, the iPhone shipments could rise to around 221 million.

Roku is bringing its Roku Ultra streaming box to Canada following its successful launch in the U.S. The Roku Ultra offers the ability to stream 4K content with all the bells and whistles we’ve grown to expect from the company. However, this new set-top streaming unit also includes some pretty neat quality-of-life improvements and design...
Steve Vegvari
57 mins ago