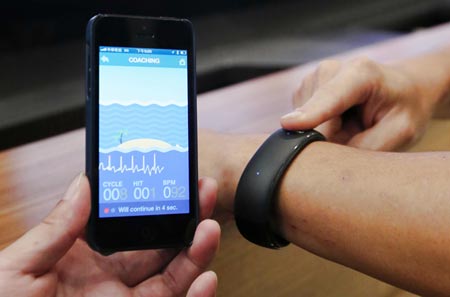 Apple supplier Foxconn has manufactured its own smartwatch to ride the new trend of wearable computing, the Want China Times reports. The new product, demonstrated during the annual shareholder meeting on Wednesday, shows that Hon Hai has decided to stop waiting for its biggest customer to proceed with the iWatch, and taken the initiative itself.

As you may expect, the iPhone-compatible smartwatch can be used as a tool to check the latest updates on Facebook or to answer a call. It can also be used to measure the user’s vital signs such as heartbeat and respiration, and in case the results aren’t looking good it can provide suggestions on what to do, according to Foxconn executives.

But the innovation doesn’t stop there. Future product updates are predicted to include new features like fingerprint identification, which would help the device to record personal health data using its internal sensors.

This product is part of the company’s plan to upstage Apple by diversifying its product range. We mentioned this earlier in the week. Sony has already launched a smartwatch which will reach customers this September, and Apple is rumoured to be launching its own variation of a smart wristwatch sometime this year.