Taiwan-based Hon Hai Precision Co., more commonly referred to as Foxconn, has today announced its plans to invest in the U.S. “We are in preliminary discussions regarding a potential investment that would represent an expansion of our current U.S. operations,” Foxconn told CNNMoney. Apple’s biggest supplier, who also plays a key role in assembling iPhones, employs hundreds of thousands of workers in China. 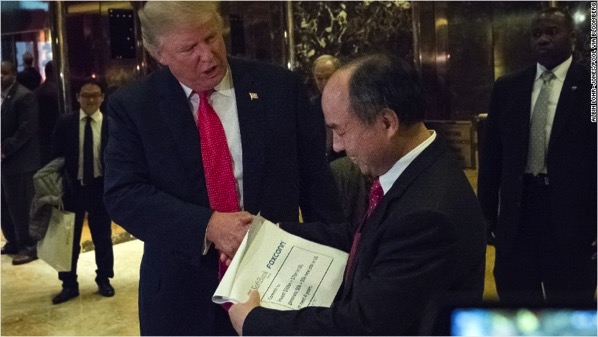 The statement was issued in response to Foxconn’s name appearing on a document, which was carried by a top Japanese tech CEO in a meeting with U.S. President-elect Donald Trump yesterday. Following the meeting, Trump took credit for a planned $50 billion investment in U.S. by Japanese company Softbank, that he said would create 50,000 jobs.

The photos showed SoftBank CEO Masayoshi Son holding a document with the logos of both his company and Foxconn’s.

“Commit to: Invest $50bn + $7bn in US, generate 50k + 50k new jobs in US in next 4 years,” the document said. That led to speculation that Foxconn could be planning to invest $7 billion in the U.S. to create 50,000 jobs. But Foxconn declined to provide any further information.

During his Person of the Year interview with TIME, Donald Trump said:

I said to Tim Cook, it’s my ambition to get Apple to build a great plant, your biggest and your best, even if it’s only a foot by a foot bigger than some place in China.

Trump also tweeted that Son told him Softbank’s investment would not have happened if he hadn’t won the U.S. election. After the meeting, Son told Trump he would like to “celebrate his presidential job” because he has made deregulation part of his platform.