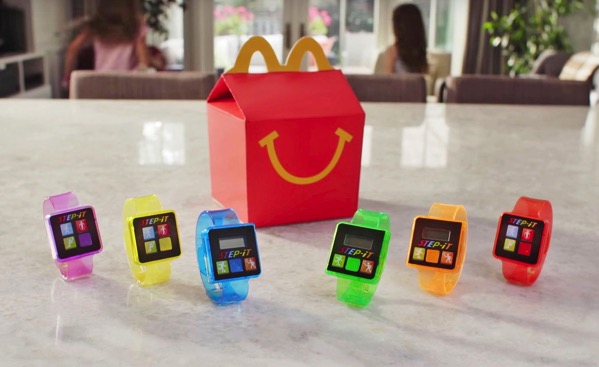 Having handed out toys with Happy Meals for over three decades, McDonald’s is now encouraging kids to get moving with a new “STEP-it” fitness tracker. As reported by Engadget, every Happy Meal sold in the U.S. and Canada will include one of six wrist-worn pedometers that also blink slowly or quickly depending on a child’s activity.

It’s been long argued that the gifts incentivize parents and children to eat more fast food, leading to health issues like obesity and diabetes.

“Step-it is in line with McDonald’s general philosophy for Happy Meal toys, which is to make toys that encourage either physical or imagination-based play,” McDonald’s Canada Senior Marketing Manager, Michelle McIImoyle, explains to CityNews.

The fast-food giant, who is one of the main 2016 Olympic sponsors and also the official restaurant of the Rio Games, has announced that the toy will be available for four weeks, during which it will advertise the tracker on TV and include it in pre-roll kid-focused ads on YouTube.

Check out the STEP-it activity tracker’s promotional ad below: