Developed by a team of researchers at the Darmstadt University in Germany, an Android app called AirGuard has been found to provide better protection from AirTag stalking than other apps, including Apple’s own Tracker Detect app (via Bleeping Computer). 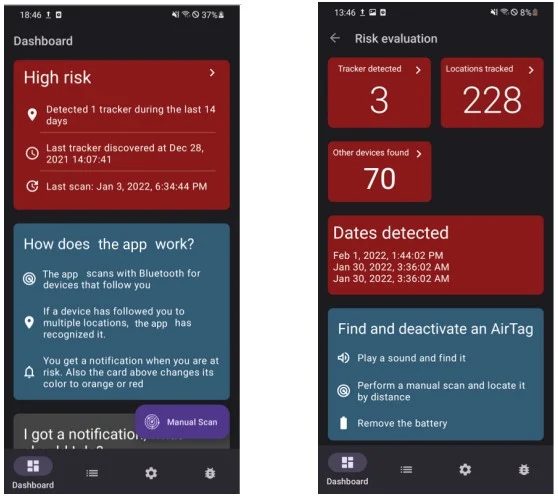 Ever since Apple released the AirTags, they have been criticized by security experts for their potential for abuse due to their tiny size as people can slip them into people’s jackets, luggage, or even cars to track them without their knowledge.

Even though Apple has implemented a complex anti-stalking system, stealthy AirTag tracking continues to remain an issue. In the case of Android users, the problem is even worse because Apple left them without an official way to locate AirTags until December 2021, when it released Tracker Detect on the Play Store.

The AirGuard app is a fully automatic and passive detection anti-tracking solution that works against all Find My accessories and other tracking devices.

The researchers have now published the results of their real-world tests taken from their experiments and drawn from community data of those using the app.

In summary, their approach was found to be superior to the iOS system, let alone Apple’s own anti-tracking app for Android.

“The evaluation showed that AirGuard found more actual trackers in different scenarios compared to the iOS tracking detection,” explained the researchers in a paper released this week.

The app was released in August 2021 and can detect all Find My devices, including self-made ones like the cloned or modified AirTags, as the ultimate stealthy tracking tool.