A group of analysts at Mixpanel have claimed that the accelerated adoption of iOS 8.4 is in large part due to the free 3-month trial of the new Apple Music service, which may prove to be dangerous for Spotify and other rival music streaming services (via Macnn). The analysts have posted a live chart of the adoption (shown below) that reveals hundreds of millions of people who have potentially signed up for free 3-month trial with Apple Music. 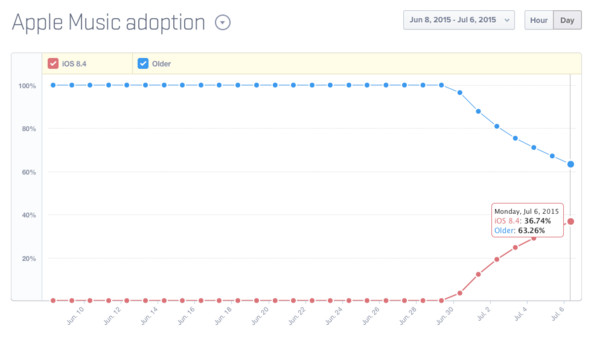 Just like Spotify, Apple Music is now available in 100 countries and offers a huge song library, though Apple may have an edge on Spotify in actual numbers of songs available, claiming over 40 million versus the latter service’s 30 million. In addition, Apple Music has also snagged a number of big exclusives, including the first-ever streaming of Taylor Swift’s 1989 album, the debut of Dr. Dre’s first album The Chronic to streaming, and celebrity shows on Beats 1 featuring performers such as Dre, Q-Tip, St. Vincent, Elton John, and more.

“Even more compelling, and potentially troubling for streaming services like Spotify, is the extended length of Apple’s free trial and competitive pricing (particularly on “family” accounts, which offer up to six individual accounts for $15 per month). Given a limited number of hours to listen to streaming music in a day, many Spotify subscribers are expected to drop their paid level and try out Apple Music for the summer — with a good possibility of staying on with it after the trial is over, particularly if the company can issue its Windows and Android versions of the service in the early-fall timeframe”.