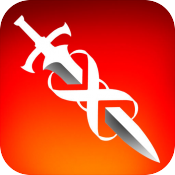 Celebrating the 4th of July, the award-winning Infinity Blade video game trilogy has been made absolutely free in the App Store, meaning you can download Infinity Blade I, Infinity Blade II as well as Infinity Blade III for free right now on your iPhone, iPod touch or iPad (via TouchArcade). This is the first time all 3 games in this notable franchise have been made free all at once.

Created by ChAIR Entertainment, the easy to use, tap-to-move controls enable players to effortlessly navigate and explore while searching for collectable items such as treasure, swords, shields, armor and other magical rewards. The series packs adrenaline-fueled sword-fighting action, gorgeous visuals, and a thrilling story of love, betrayal, and redemption.

Check out the following promo video of the Infinity Blade Trilogy: