Free-tier Spotify subscribers can now stream their favourite music from the world’s leading music streaming service to any Spotify Connect-enabled speaker, The Verge is reporting.

Previously, only Premium subscribers could stream music to Spotify Connect speakers but now, non-paying Spotify subscribers can also enjoy the ad-supported service over a high-quality Wi-Fi connection instead of Bluetooth. 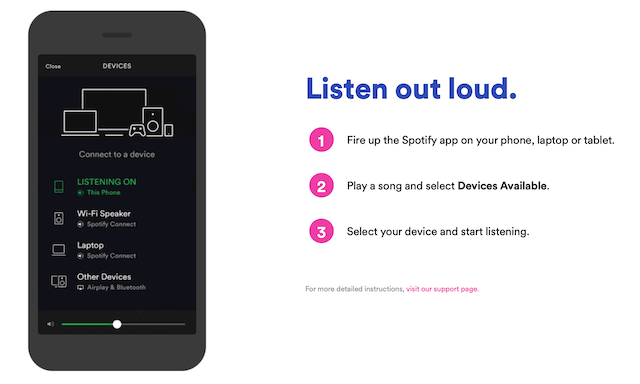 According to the source, compatible speaker manufacturers will, however, need to update to Spotify’s latest SDK in order to benefit from the change.

There are still plenty of limitations to the service if you opt not to pay. Spotify free subscribers can’t download songs, can only skip a limited number of tracks, and are confined to lower-quality audio.

Earlier his year, Spotify introduced a redesigned app that offered its free tier users a lot more freedom in what they can listen to. The company gave free users 15 auto-generated playlists which they could freely choose to play songs from, without being forced to shuffle tracks, albeit with ads after every few tracks.

To find out more about Spotify Connect, click here.