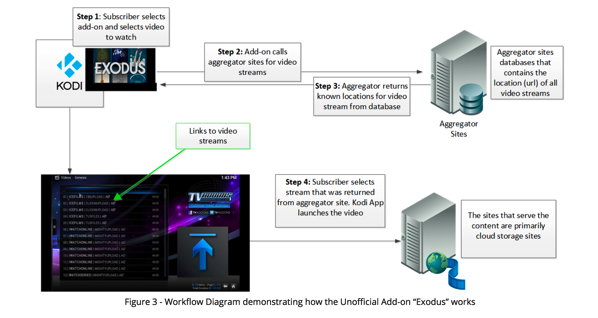 Canadians are tempted to gain access to unlicenced content with the help of Android TV boxes, according to a new study released by Waterloo-based technology company Sandvine.

The company has recently published its findings on the North American market after analysing the presence of Kodi, formerly known as XBMC, and Xbox Media Centre, an open source media player that allows users to view local and remote videos on PCs, set-top boxes, smartphones and tablets.

Android TV boxes pre-loaded with Kodi are attractive to users, because they allow the streaming of pirated content on any TV. The “fully-loaded” Kodi box is essentially a small set-top box with enough computing power to play HD content. Importantly, it comes pre-loaded with the unofficial add-ons and Kodi software configured to access unlicenced content. Simply by plugging such a box into a television and connecting it to the Internet, a large catalog of unlicenced content becomes available to even the most technically challenged user, the Sandvine report reads.

And these boxes can be purchased for roughly $100 from various sources.

The Sandvine report comes shortly after Bell, Rogers and Quebecor took legal action against at least 45 Canadian dealers selling loaded Android TV boxes. Where to buy an Android TV box? There are a bunch of models available on Amazon.ca.