Future Apple Devices May Have a Built-In Smoke Detector

iPhones and iPads pack tons of sensors, but Apple is working on expanding its capabilities even further: a recent patent application discovered by Business Insider describes a future Apple device sporting smoke detectors (via Patently Apple).

Apple isn’t quite satisfied with the current status of smoke detectors: they are placed at fixed locations, and there is a possibility of users being out of range from the coverage of the smoke detector. As a result, they may not hear the alarm. Besides, the smoke detector alarms cannot reveal information such as how many occupants are in the building. 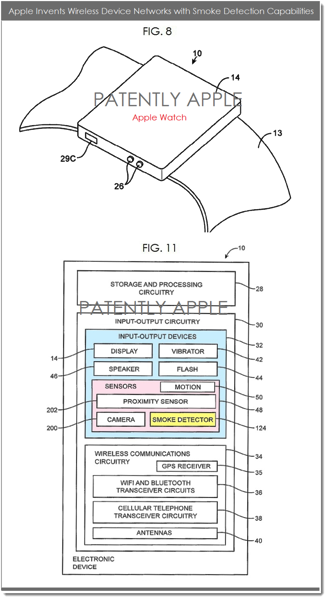 To address this issue, Apple has imagined iDevices — as detailed in the patent application — that are be able to call 911 in the case of an emergency situation. Furthermore, Mac or iOS products with a smoke detector on board will be able to collect information about the location using other built-in sensors, such as how many inhabitants are there.

It is worth noting that the software would work with HomeKit. When Apple devices sense smoke, they may issue an alert or take action like texting or sending an email, activating fire suppression equipment, creating audible alerts, etc.

The Apple patent was originally filed for in 2013 and credits Paul Puskarich as inventor.