The iPhone rumor mill is in full steam at the moment! According to our friends from Touch Podium, the iPhone release date in Canada was “leaked” by a sales associate from Future Shop. The following conversation occured during the checkout process:

This could be some interesting news as to when the iPhone will be released in Canada, but I don’t think a Future Shop associate would be the bearer of such important news. The best thing we can do is wait for the announcements at the WWDC conference in June. The iPhone could possibly be announced in June, but won’t be available in stores until September. Since Rogers is not saying a lot about release dates rest assured a big announcement is coming. Nonetheless, this is some interesting news for all you iPhone-coming-to-Canada-rumor junkies! 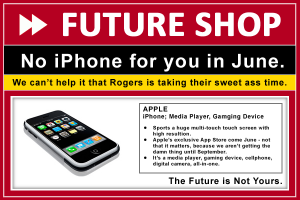