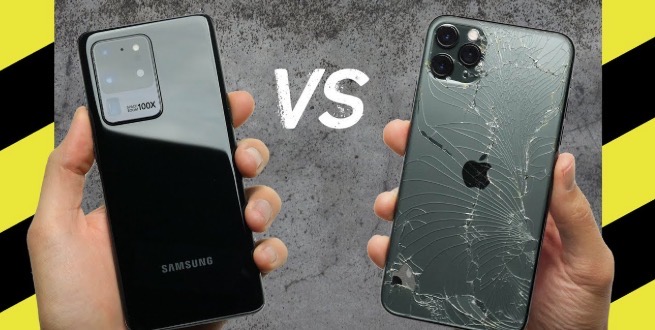 Tech reviewer PhoneBuff has performed drops tests pitting the Samsung Galaxy S20 Ultra versus the iPhone 11 Pro Max. The tests are performed using a machine, dropping the expensive smartphones onto a concrete block.

The first test was the back drop and Apple’s iPhone 11 Pro Max saw its rear shatter completely on the first drop. The Galaxy S20 Ultra and its Gorilla Glass 6 remained intact, but PhoneBuff says the huge rear camera bump on the Samsung may have helped it survive a smash back, as it took the main part of the impact.

In the corner drop, both phones survived relatively undamaged aside from some scuffs, with the iPhone taking the win thanks to its stainless steel frame able to withstand more of the impact.

In the face drop, the iPhone 11 Pro Max gets a large crack on its left edge, while the Galaxy S20 Ultra didn’t suffer any damage.

In the bonus round, the Galaxy S20 Ultra saw damage on the first drop with the finger sensor no longer working properly, while the screen no longer works as intended either. After 9 “brutal” bonus drops, the phone becomes fully unusable.

Overall, PhoneBuff scores the Galaxy S20 Ultra with a higher score versus the iPhone 11 Pro Max, as it was able to withstand more drops in the early rounds, but not the bonus round, as the iPhone lasted longer as seen in previous tests, surviving 10 bonus drops.