Galaxy S6 GPU Performance Disappoints vs iPhone 6 Plus in Benchmarks

Samsung fans may be hoping it’s just another April fool’s joke but unfortunately for them, it isn’t, as graphics performance benchmarks of the new Galaxy S6 have turned out to be quite disappointing, especially when compared to the iPhone 6 and iPhone 6 Plus, according to recent benchmarks.

Even though the company has touted the device’s “Octa Core” Application Processor, 2.6GB of RAM and an extremely high resolution display, the Galaxy S6 falls flat in running GPU intensive apps and games, turning in benchmarks significantly lower than Apple’s iPhone 6 Plus and its dual-core A8 chip, according to tests performed by AppleInsider’s Daniel Eran Dilger. 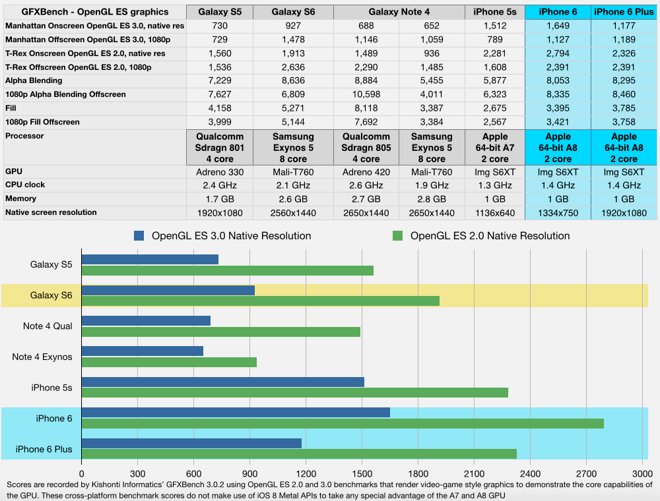 One of the main reasons why almost all new apps and games appear on iOS first, and only arrive on Android after they’ve proven to be successful in App Store, is because companies like Samsung have pushed screen technology ahead of their own processor capabilities, resulting in extremely poor performance in high definition. The latest benchmarks show that Samsung’s new “Exynos 7” powered Galaxy S6 drops down to 15 fps, which is just 78% of the frame-rate of iPhone 6 Plus in the same test.

The first benchmarks showing off the actual performance users will get from the new Galaxy S6 highlight that Samsung appears to still be making poor engineering choices, and that the conventional wisdom about Samsung’s advantages in operating its own chip design and fab are also wrong.

Looking at the competitive low-level theoretical scores of the GPUs Samsung uses, it appears that the company’s devotion to extremely high resolution numbers is a spec list checkmark and is a primary contributing reason for poor real life scores in rendering 3D OpenGL scenes. In other words, the chips Samsung is choosing to use could theoretically match Apple’s latest iPhones if they were not also driving tons of additional pixels that contribute little to no benefit to users. Think of it as a reasonably powerful engine installed into a monster truck with massive wheels it can barely turn.

Press reviews of the new Galaxy S6 have been well received, but many reviewers note Samsung’s design team has pretty much copied Apple’s iPhone to get to where it is today, still. Take The Wall Street Journal’s review, and how their technology reporter Joanna Stern elegantly puts it:

One reason I probably like the new Galaxys so much—especially the white models I’ve been testing—is that the design looks like a compilation of the iPhone’s greatest hits.

The screen’s glossy frame, the metal edges and the silver trim surrounding the home button look so very similar to my iPhone 6. Both Samsung phones even measure just 0.27-inch thick—just like the iPhone 6. With the speaker strip and ports on the bottom edge, Samsung doesn’t even try to hide its similarities to Apple’s work.

You can read more about Samsung’s questionable Galaxy engineering choices in this extensive article here.