According to an interesting new study of viewer heart rates carried out by the developers of the Cardiogram app for Apple Watch, there’s “a certain dramatic tension” in the smash-hit TV show ‘Game of Thrones’, that tends to get the audience’s blood pumping, even more than the epic bouts of violence (via Science Alert). The study is based on 2.3 million measurements from 300 viewers. 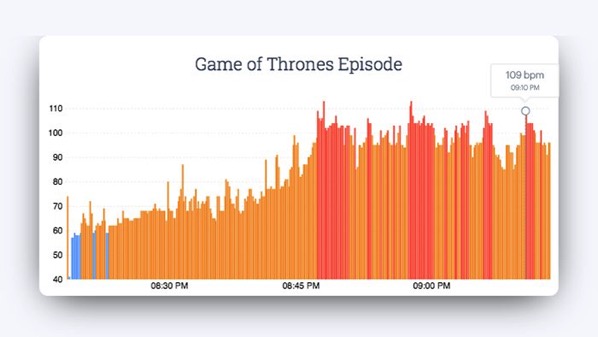 Back in 2015, Cardiogram showed how a particularly intense bout of White Walker zombie action was able to sharply increase heart rate beats-per-minute (BPM). In the 2017 follow-up study titled “What Game of Thrones does to your Heart Rate”, it found that of the top five heart-racing moments, four largely involved dialogue, drama and tension between characters rather than sword-on-sword or dragon-on-army clashes.

Cardiogram tracked heart rates across the first four episodes of season 7 before crunching the data to see which bits got viewers most excited. Participants were asked to use the app to log their heart rate every five seconds, starting from a quarter of an hour before each episode started.

WARNING! Spoilers below for those first four episodes of season 7.

Well, it looks like drama rather than action is what makes Game of Thrones viewers’ heart rate race.