We all know that Steve Jobs is unlike any corporate CEO. He’s willing to go ‘tit for tat’ with customers that email him about issues or concerns. Steve also is pretty clear that he doesn’t like Adobe’s Flash plugin.

When Gawker’s Ryan Tate decided to email Jobs after the latest iPad commercial irritated him. What followed was a heated email exchange with Jobs delivering the final blow to the jugular:

“By the way, what have you done that’s so great? Do you create anything, or just criticize others work and belittle their motivations?

You can read the entire email exchange below: 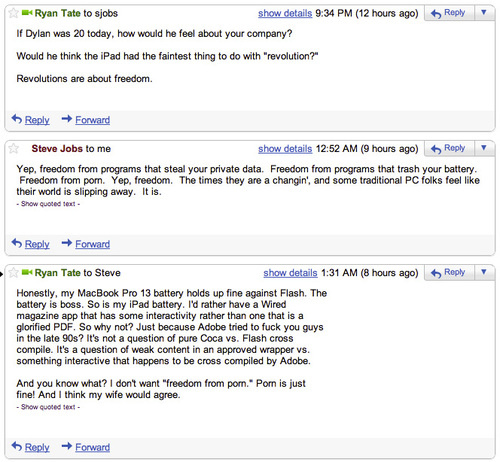 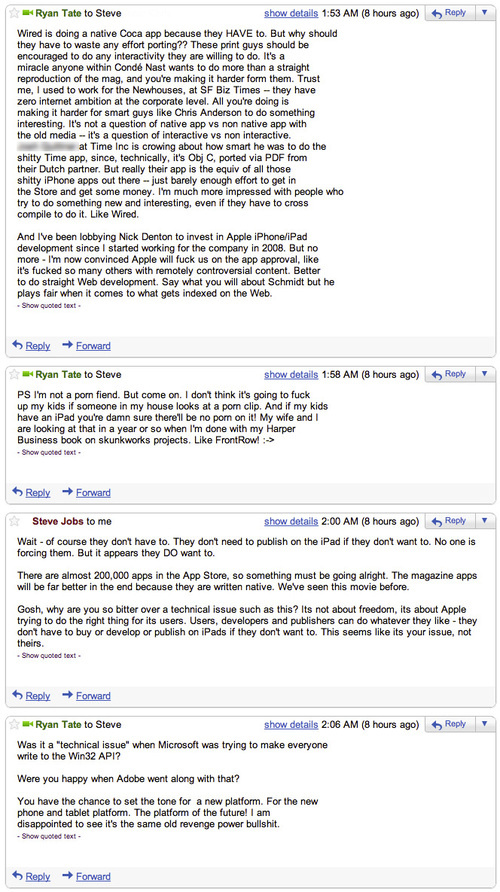 I don’t understand why people get so passionate about questioning Apple and their vision. Their products make life easier for the end user, albeit they love to control every single aspect of the device you’re using. For some people, like myself, I’m fine with this. Sure, I have my gripes about the lack of control at times, but overall I don’t lose any sleep over it.

I’m happy to give up some control if that means my devices will work and I don’t have to bother with troubleshooting and other technical details. I already had my fun toying around and tinkering with building my own PC years ago. Today, I just don’t have time to deal with PC issues anymore. This is why I enjoy using my Apple products. For people who don’t like the way Apple controls its products–don’t buy them. There are lots of alternatives out there like Android.

What do you think about the above email exchange? I’m surprised Steve wrote so much this time!