Spotted last week by Slashleaks (via MacRumors), a Geekbench benchmark result for an unreleased Mac codenamed AAPJ140K1,1 revealed a model powered by a dual-core eighth-generation Core i7 processor with a base clock speed of 1.8GHz. Turns out the unknown Mac’s logic board has the same part number as the new MacBook Air. 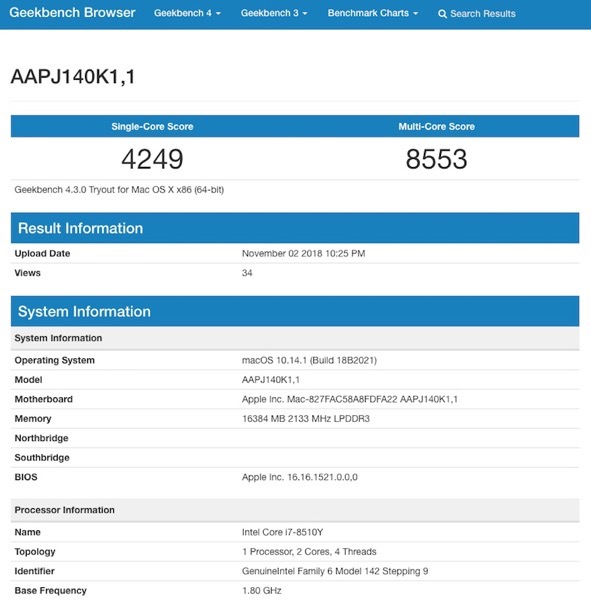 According to Geekbench founder John Poole, the benchmark result does not look fake to him and that it strongly suggests that Apple may have been testing a 2018 MacBook Air with a Core i7. It is routine practice for Apple to prototype several versions of its products, although only a select few actually get released to the public.

As further evidence, the benchmark result lists 16GB of 2133 MHz LPDDR3 RAM, an existing upgrade option for the new MacBook Air. And the Core i7-8510Y appears to be part of Intel’s low-power Amber Lake lineup, as is the Core i5 in the new MacBook Air, although it’s not listed on Intel’s ARK database.

The apparent MacBook Air with a Core i7 chip has a multi-core Geekbench score of 8,553, which is almost 8% faster than the Core i5 model.

Even if Apple does have a Core i7 MacBook Air planned for release, it won’t be happening anytime soon since the company has just refreshed its notebook lineup.