The Global GO app now officially supports Google Chromecast, making the former among the first Corus app to support the latter, for both live TV streaming (once signed into your TV provider) and on-demand content. Similarly, users can also now “cast” shows to their connected televisions from an iOS or Android device. 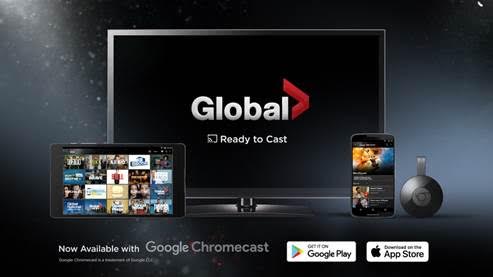 “We continue to strive for seamless and convenient distribution of our Global GO app so our audiences can watch our hit programs on the screen of their choice from the platform they choose,” said Maria Hale, Senior Vice President, Global Entertainment & Content Acquisition, Corus Entertainment, in a statement to iPhone in Canada. “Adding Chromecast creates a truly connected TV viewing experience for our loyal and growing Global GO viewers.”

According to Global, all versions of Chromecast are supported, including televisions with built-in Chromecast hardware, while mobile devices can be used as a remote to control playback and audio.

Global GO is currently available on tvOS on Apple TV, while also available in the App Store for iPhone and iPad. Other apps available from Corus include Treehouse, HISTORY GO, Disney Channel Canada, Disney Junior Canada, YTVGO, and NickGO.

In Early April, you may recall Global GO unofficially rolled out Chromecast support but for only 1% of its users for preliminary testing. That testing period looks to be over now, with today’s official launch.