Despite the COVID-19 pandemic, worldwide smartwatch shipments reached 14.3 million units in Q1 2020 to mark a 12% year on year increase, Canalys is reporting. According to the report, this is also the first time North America accounted for less than a third of global smartwatch shipments. 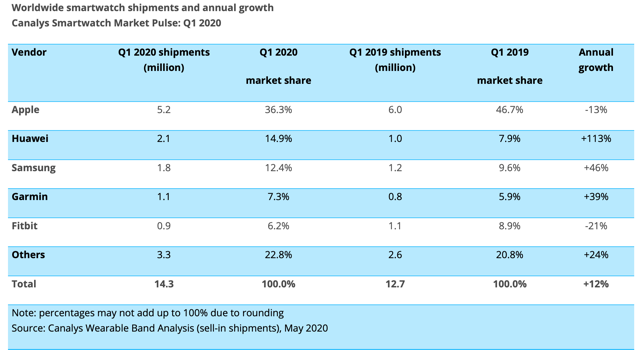 Even though Apple’s shipments saw a 13% decline during the period, its smartwatch platform remains the world’s largest and is growing steadily. WatchOS gained 4 million new active users during the quarter to bring the total installed base to an estimated 70 million. In the next three months, lifetime Apple Watch shipments will reach 100 million units.

Alongside Apple, Huawei captured the greatest number of new users as smartwatch shipments in China grew 66% in Q1 2020.

The analysts expect China to be the key smartwatch growth driver in 2020 as a result of its strongly recovering economy.