Sometimes when Gmail’s IMAP or Push interface isn’t working properly within the Mail app on the iPhone, you can always fall back on the HTML5-powered web interface on your iPhone. If you’re looking to search within your Gmail, the web version is definitely your best bet.

Looks like the Google team is improving Gmail on the iPhone once again. Previously, when composing email you would have to use the magnifying glass to scroll down. Now, the compose box is auto expanding! That’s right. It’ll automatically get bigger as you write and scrolling back to the top is easier than before. Well done, Google!

Visit Gmail.com on your iPhone to check out this new feature (requires OS 2.2.1 or above). 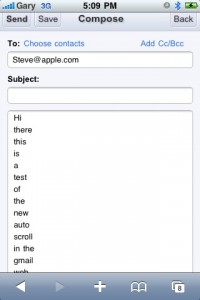