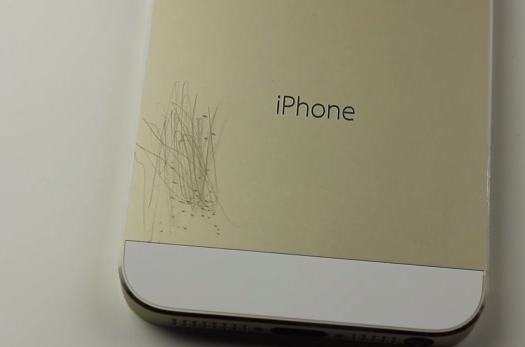 JailbreakNation has posted a video of the alleged gold/champagne iPhone 5S shell undergoing a scratch test with a coin and knife versus the iPhone 5. Their conclusion? The gold iPhone 5S shell managed to fair well against the coin, unlike the iPhone 5, but with a knife both units suffered the same ugly fate.

Essentially, they claim their gold prototype withstood a real life scratch test better than the iPhone 5, which has been known to be susceptible to easy scratches and peeling. Check out the video below to see for yourself:

In a separate video, JBN goes hands on with the gold iPhone 5S shell and shows what it looks like outside in the sun:

The site was able to access the prototypes with the help of Sonny Dickson, who has been the source for numerous alleged iPhone 5S and iPhone 5C leaks. Just yesterday, the first video was posted online comparing the gold iPhone 5S to the plastic iPhone 5C shell.

Apple is expected to announce two new iPhone models at an event set to take place on September 10.