Today, Google has updated their News & Weather app with Apple Watch support. This is the first app by Google to gain support for Apple’s wearable device.

The update allows you to swipe through the top news headlines of the day on your wrist. It seems as though the app on the Apple Watch only offers news and completely ignores the weather aspect of the full smartphone app. 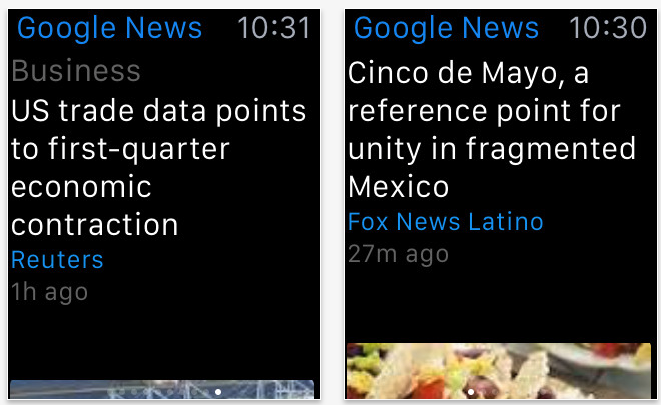 You can turn the digital crown to see photos accompanying the top headlines, however, the app does not let you read the full news story on your wrist. Tapping on a story does absolutely nothing, but you can Force Touch on the story which gives you an option to add that news item to Safari’s reading list.

It seems as though we will have to wait a little longer for Google to add Apple Watch support to apps like Gmail, Search, Calendar, and Hangouts. However, the update released today shows the company’s interest in developing for Apple’s wearable device. Hopefully the company’s next few Apple Watch compatible apps offer a bit more functionality.

Google News & Weather is available as a free download from the App Store. The app requires a device running iOS 7.0 or later and has been optimized for the iPhone 5, 6, and 6 Plus.