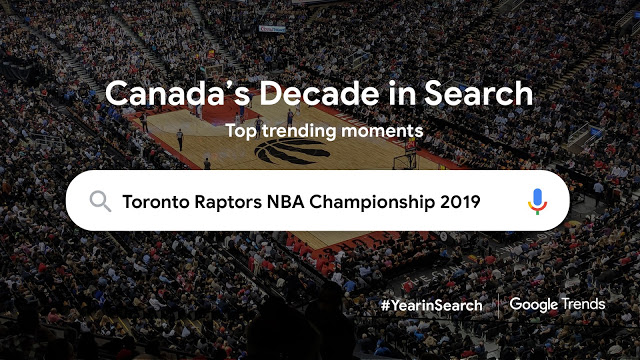 Google also shared the 10 trending ‘Canadian Moments of the Decade’, seen below:

1. Toronto Raptors win the NBA Championship for the first time ever
2. Bianca Andreescu becomes highest ranked Canadian tennis player of all time; wins two grand slams
3. Drake dominated pop music this past decade; the Toronto native beat the Beatles’ 50 year record for the most top 10 singles on Billboard’s Top 100
4. The Humboldt Broncos Bus Crash unites the nation in tragedy
5. Canadians from coast to coast tuned in to watch The Tragically Hip’s final concert following Gord Downie’s cancer diagnosis
6. Canada meets its target to resettle 25,000 Syrian Refugees
7. During his third mission to space, Colonel Chris Hadfield became the first Canadian Commander of the ISS, making him the first Canadian in history to command a spaceship
8. Justin Bieber is currently the most subscribed to artist on YouTube with over 20 billion views. Trending searches for Bieber peaked in 2011 when Never Say Never debuted.
9. Canada celebrates the heroes of the Fort McMurray wildfire
10. Canada arrives on the world stage like never before with the Vancouver 2010 Olympics

“The rise in prominence of Canadian sports continued throughout the decade,” writes Alexandra Klein, Google Public Affairs & Communications, in a blog post. As for 2020 and into the future, trends indicate 75% higher searches for climate change in 2019 compared to 2015, along with searches on how to find a new job and how to start a family.

[caption id="attachment_389490" align="aligncenter" width="1400"] Image: Marcus Kane[/caption] As we count down the months to the launch of Apple's long-rumoured mixed-reality headset and, with it, an entirely new product category for the tech giant, we're starting to see more leaks and concept designs pop up. The latest concept renders of Apple's "Reality Pro" AR/VR headset imagine...
Nehal Malik
13 mins ago