Google is celebrating the 10th birthday of Chromebook by sharing a look at how its notebooks have evolved over the years. The company is also launching a suite of features for Chromebook that lets people move between devices with ease. 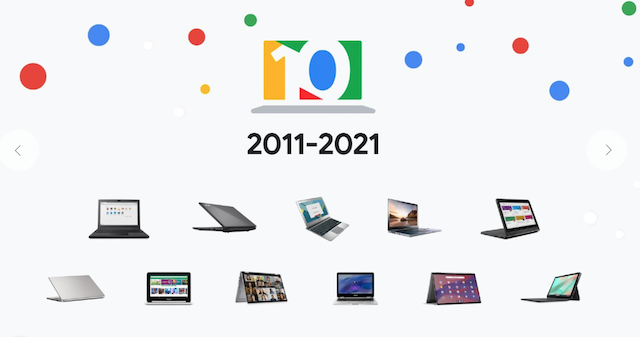 In 2015, the first Chromebook with USB-C technology was launched and two years later, Google introduced Chromebooks with the Titan C security chip to keep devices secure and protect user identity.

Today, we work with several important partners — Acer, ASUS, Dell, HP, Lenovo, Samsung, AMD, Intel, MediaTek, Qualcomm, among others — to make Chromebooks of all shapes and sizes, and collaborate with over 20 Works With Chromebook partners like Anker and Logitech on compatible accessories so you can get the most out of your Chromebook.

Google says its vision for Chromebooks for the next 10 years is to “keep helping people get things done” and to provide helpful and secure experiences. You can check out this link for all the new features coming to Chromebook.