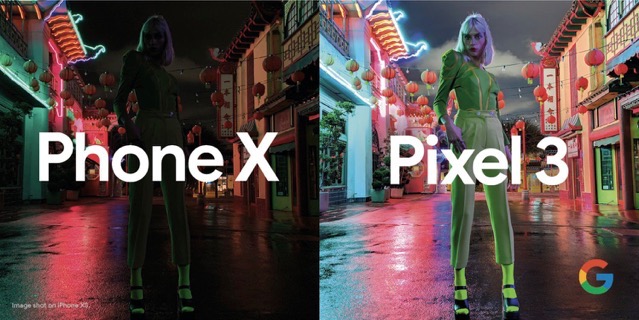 Continuing to compare its latest Pixel 3 flagship smartphone with the iPhone XS, Google’s latest advertising campaign uses a side-by-side comparison of the same scene shot by both the Pixel 3 and the iPhone XS, or simply the ‘Phone X’, to spotlight its Night Sight camera feature (via 9to5Google).

Night Sight on Google Pixel3 — pretty much speaks for itself ? #teampixel pic.twitter.com/ao0Yi2W2Sq


Looking at the picture, one can clearly appreciate the details in the Google picture, which shows the neon green-clad subject clearly, whereas her face is impossible to make out on the shot taken with the “Phone X”. The dark sky is also brightened and grayish with white steam visible in the Pixel 3 photo.

“The bottom corner notes that the image was shot with an iPhone XS, just like the previous comparison highlighted at the 10/9 event. In terms of lighting, Google’s technique somewhat washes out lighting in the background, but if the point of the photo is to capture the main subject many will excuse that decision.”

A Google Pixel 3 ad in November last year also emphasized the downsides of using flash and the advantages of Night Sight’s machine learning to balance colours.

Any shred of mystery Google was saving for its Pixel 7 series launch event on Thursday, October 6, likely dissipated when a detailed and legit-looking spec sheet for the two phones leaked online over the weekend (via 9to5Google). Apparently, a mobile carrier in Taiwan prematurely shared the spec sheet for Google's Pixel 7 and Pixel...
Nehal Malik
40 mins ago