Google Confirms Renewal of Maps and Search Deal with Apple

All Things Digital currently has their D9 Conference happening, and this is where the tech industry’s giants sit down and chat with Walt Mossberg and Kara Swisher. During the most recent chat with Google Executive Chairman (and former Apple Board of Director), Eric Schmidt, it was revealed Apple and Google will be continuing their search and maps relationship.

As first noted by Engadget in the audience at D9:

“We just renewed our Map and Search agreements with Apple, and we hope those continue for a long time.”

This confirmation by Schmidt confirms previous rumours of Google Maps remaining as part of iOS. With details of iOS 5 to be revealed next week at WWDC, we look forward to what Apple and Google will bring. Possibly a native turn-by-turn GPS app? This is already available on Android OS.

San Francisco’s Moscone Centre Already Being Decked Out for WWDC 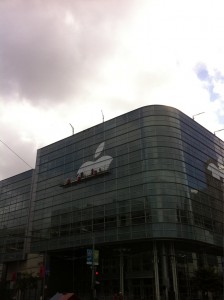 As taken by @aaronmfisher. Can’t wait till next week.