With Apple strongly predicted to debut new, low-cost iPads with Apple Pencil support at tomorrow’s education-themed event, Google has today unveiled its first ever Chrome OS tablet. Named the ‘Acer Chromebook Tab 10’, the tablet features the same 9.7-inch, 2048 x 1536 display as the iPad, with support for a built-in stylus to rival the Apple Pencil. 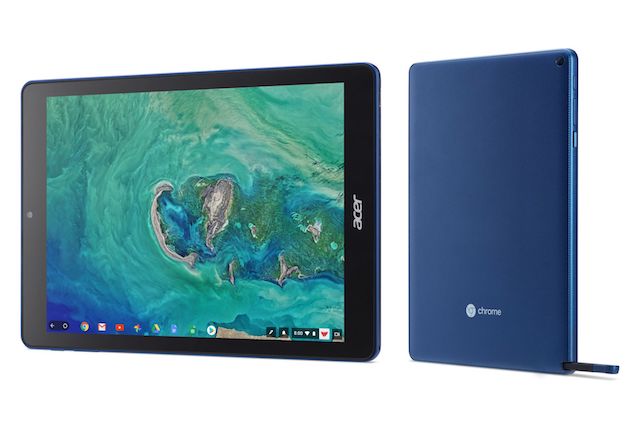 According to Google, the Acer Chromebook Tab 10 is an education tablet that gives schools the easy management and shareability of Chromebook laptops. It runs the same full-featured Chrome OS already found on existing tablet convertibles with a dock at the bottom of the screen. Weighing in at 1.21 pounds, Google says the Chromebook Tab 10 has been designed for collaboration.

“These new Chromebook tablets are lightweight and durable, allowing students to collaborate, create and learn from anywhere. They come with a low-cost Chromebook stylus inside that doesn’t require charging or pairing. The stylus uses advanced machine learning to predict student writing for a natural writing experience.

Just like Chromebook laptops, students can quickly and securely log on to any device for a personalized learning experience and just as easily log out from all apps when class is over. Verified boot checks security at every boot and all user data is encrypted, making each Chromebook tablet secure and shareable.”

The Acer Chromebook Tab 10 will go on sale for US $329 in the U.S. next month, with a worldwide release expected in May.