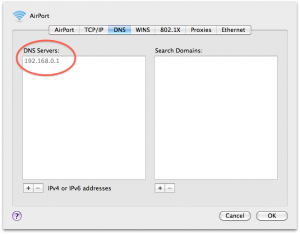 Reports are coming in from across the web of huge slowdowns in downloading content to your iTunes accounts – on your iPhone and other iOS devices, including Apple TV. The blame – and via the numerous articles I’ve read this is not confirmed by any stretch – is being put on “alternate DNS servers” such as Google DNS or OpenDNS.

iTunesâ€™ video content is delivered by Akamai who has distributed massive datastores around the world so those large files originate from nearby servers and spend less time getting switched around the network. Akamai somehow uses our DNS routing to determine our location. If Google DNS or OpenDNS routes everyone to Akamai the same way, then those Akamai nodes and the pipes leading to them get overwhelmed.

I’ve personally experienced some of these challenges and last night moved away from my standard 8.8.8.8 DNS settings (Google DNS server settings if you’re unfamiliar). It appeared to work immediately. I haven’t done “scientific” testing by any stretch but I will be leaving my DNS settings pointed to my ISPs DNS server for a while.

I’d love to hear from others who may be having this problem. Does this “fix” fix it for you?