As spotted by 9to5Google in a new Google support document, users will soon be able to view activity metrics, such as steps, calories burned, and more from their Fitbit or Google Fit trackers on the Nest Hub display. 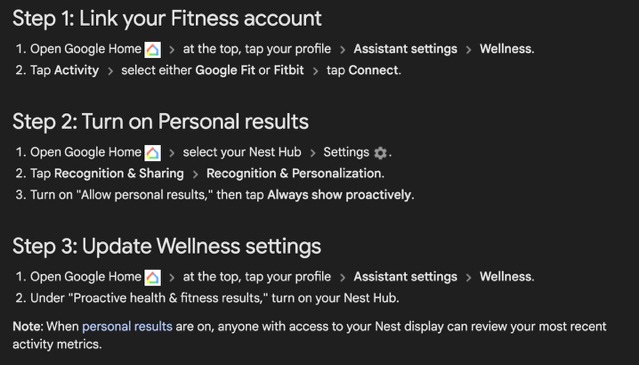 “Activity metrics like number of steps and calories burned from Google Fit or Fitbit can be shown on your Nest display,” notes Google. While the support article provides detailed instructions on how to enable this integration, key Assistant settings have not yet been rolled out.

Currently, going to Assistant settings > Wellness > Activity only shows the Calm service. But in a future update, Google Fit and Fitbit will also appear here for users to “Connect” to Google Assistant.

From what details are available, it looks like Google will show various metrics directly on the Nest Hub. Assistant only does this for sleep stats on the 2nd-gen Nest Hub with Soli-powered Sleep Sensing as part of the “Wellness” tab. You’ll presumably also be able to verbally ask for these activity stats.

A release date for the upcoming Fitbit and Google Fit integration on the Nest Hub has not yet been announced.