Here comes another neat update from Google for iOS users, as announced on their Mobile Blog. The latest feature is an ‘undo’ bar when using Gmail’s mobile web app. This ‘undo’ feature has been available for Gmail users on desktop browsers for a while now, but now it’s available for your iPhone.

Now when you use the Gmail mobile web app, youâ€™ll have a small window of opportunity to undo four key actions: archive, delete, add or remove a label, or move a message/conversation.

When you take one of these actions, Gmail displays a yellow bar that recaps what you just did and allows you to undo it: 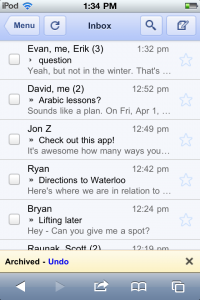 This bar stays in position even if you move to another screen (e.g. moving to â€˜Menuâ€™ from â€˜Inboxâ€™). If you donâ€™t happen to catch your mistake in time, not to worry: all four actions can still be undone through other means (e.g. you can move a message from Trash back into your Inbox).

What a great little tweak (similar to their recent ‘Easter egg’). I can’t tell you how convenient the ‘undo’ feature has been on the web.

Previous updates for Google on iOS include interactive weather results, and improved stock ticker searches. Let me know how you like this new ‘undo’ feature!