Today Google announced the launch of a new application called “Google Places” for iOS devices. The app allows users to search for nearby places and then further allows users to personalize the results using a ratings system.

In case you aren’t familiar with Google Places, it lets you quickly search for places nearby and personalizes the results based on places you’ve rated. We get you started with a few popular search categories, but you can also tailor the list by adding your own favorite searches. This makes it fast and easy to find the best places for you with little fuss.

Google Places also launched with Google’s “Hotpot” social ratings and reviews feature. Hotpot allows users to rate restaurants and other establishments from their iDevices. The user ratings are then used to inform Google’s own recommendations. 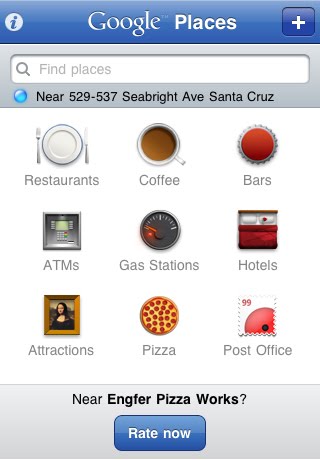 When using the application, a “Rate now” button is visible that will let users rate the establishment they are in. The app uses the relative location of the user to find the current place they are at and lets users post a Hotpot review from their device. 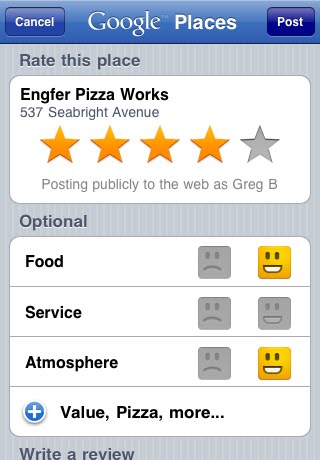 Google Places is currently English-only, with new localizations coming soon. The app is available in the App Store for free.