Today Google launched a new tool in Canada called Map Maker that promises to bring greater detail to Google Maps. The tool allows individuals to add their expert local knowledge of their neighbourhood or hometown directly to Google Maps. 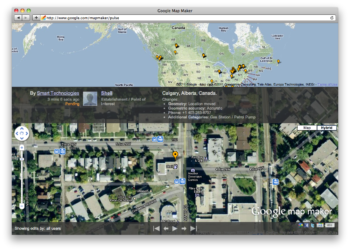 To start your adventure as an amateur cartographer, head over to the Map Maker site and either add content (such as roads, parks, and points of interest to the map), or adjust incorrect information.

Google’s instructional video suggests that you map the contours of a college campus, such as adding a shortcut across campus. It’s this kind of crowd-sourced Wiki functionality that will allow Google to create an accurate, detailed, atlas of the world.

The additional of user generated local knowledge promises to improve the iPhone user experience. It’s the signature of an iPhone user to plan a trip and find directions on the go. With MapMaker, you’ll know the best way to get where you’re going, and can trust that the informations is up to date.

Map Maker was launched in America last April. It has been used for some time in a number of countries, including Cyprus, Iceland, Pakistan, Vietnam and some Caribbean nations.

The information is vetted by Google to make sure it is accurate before changes are made to Google Maps.

You can also watch a real-time display (requires Google Earth plug-in) of the edits being made worldwide.